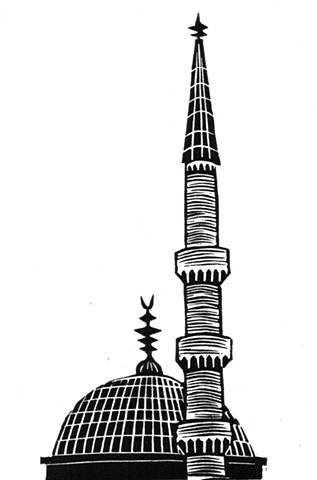 The Voyage of the Red Canoe
Book Illustration from Saving Nails
by Thomas R. Moore
Linocut
5" X 7"
< previous next >

THE VOYAGE OF THE RED CANOE

Life can’t be all that bad, I’d think from time to time. Whatever happens, I can always take a long walk along the Bosphorus. ~Orhan Pamuk, Istanbul

In the old dream I paddle my battered red canoe down the Bosphorus from the Black Sea to the Marmara, past Emirgan, Rumeli Hisar,

and a son. They anchor me to this strait. This is the city of their lives cut short. I pass Cinzano umbrellas marking familiar cafés, köfte

aromas lingering over the water. I cross to Anadolu Hisar where a potter twists earth into perfect vases, and a three-legged dog caroms

through the trees. Off Leander’s Tower I shut my eyes and see my children cavorting in the swell like dolphins. I hear taxis rattling

on the cobbles, tennis racquets beating a rhythmic thwack thwack on the Robert College courts. The Black Sea current lifts and rolls

the yellow ferries crossing to Kadiköy, and a Bulgarian freighter thumps north, Varna lettered on her stern. I paddle as a thin call to prayer

echoes from the minarets along Pamuk’s consoling Bosphorus. And then these questions: How can this city be so astoundingly

beautiful? Why are these sounds—a muezzin’s call, a snapping Turkish flag, a ship’s horn—not the signs of an answerable god?